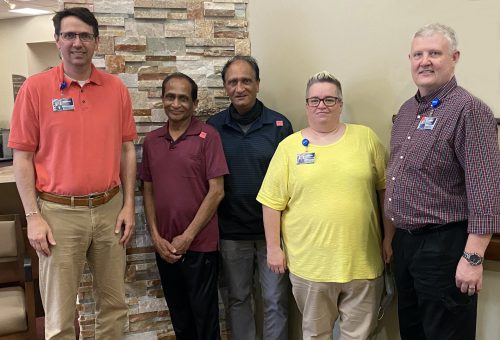 Liberal, KS– SWMC recently received a donation in the amount of $5,000 from a local family.  Brothers, Dhiru Patel and Bipin Bhakta donated these funds in honor of their mother, Manglaben Patel.  Manglaben was a recent patient at Southwest Medical Center. “We believe in supporting the community that has always supported us,” Bipin Bhakta said.  “Our mother received exceptional care during her stay at SWMC, so we thought the perfect way to honor her, was to give back to this hospital.”  Patel and Bhakta have been Liberal residents for more than 30 years, operating various hotels.  They’ve also established the Natvarbhai Bhakta Memorial Scholarship at Liberal High School in honor of their father who passed away several years ago.  This scholarship is awarded to one qualifying senior who plans to major in education or medicine.  “This donation is a testament to the generosity of this family.”  SWMC CEO, Robert Whitaker said. “This shows how much they truly care about our community and we are very thankful.”  The donated funds will be used for capital improvements and renovation projects at Southwest Medical Center

Manage Cookie Consent
To provide the best experiences, we use technologies like cookies to store and/or access device information. Consenting to these technologies will allow us to process data such as browsing behavior or unique IDs on this site. Not consenting or withdrawing consent, may adversely affect certain features and functions.
Manage options Manage services Manage vendors Read more about these purposes
View preferences
{title} {title} {title}